EMERGENCY ALERT CLARKSTON ROAD, JUST EAST OF JOSLYN ROAD, IS REDUCED TO ONE LANE FOR GAS UTILITY REPAIRS Read On... TEN MILE RD, MEADOWBROOK TO HAGGERTY IN NOVI, TO CLOSE JAN. 5 FOR CULVERT REPLACEMENTS Read On...

What Is the Road Commission?

In Michigan, all roads fall under one of three jurisdictions. About 8 percent are state highways (which includes interstates). Cities and villages control 17 percent of roads. The remaining 75 percent fall under the jurisdiction of countywide governmental agencies known as road commissions (with the exception of Wayne and Macomb counties, where the county's Department of Public Services functions as the road commission). 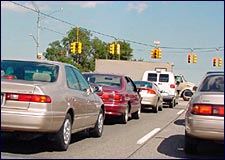 
The state law enabling counties to create road commissions was enacted by the Michigan Legislature in 1909 to provide uniformity in road construction and maintenance across the state. The Road Commission for Oakland County was created in 1913.

Road commissions provide local control of roads and a local base of road knowledge as well as efficient and economic road services for townships that, individually, cannot achieve the economies of scale available to a countywide agency.


Road commissions have no taxing authority and get most of their funds from fuel taxes and vehicle registration fees. Fuel taxes, as user fees, are considered the most equitable way of paying for roads.


Road commissions are separate from county general government and are governed by three- or five-member boards (RCOC has three Board members). The members of the RCOC Board of Road Commissioners are appointed by the Oakland County Board of Commissioners and serve for six-year terms.

RCOC Maintains:
RCOC provides summer and winter maintenance on its roads and is under contract by the state to maintain state highways in the county.


Because many people do not know road commissions are separate from county general government (though in a few counties they have been merged), in Oakland County, the name was changed to the Road Commission for Oakland County to make the distinction clearer and to emphasize our customer-service focus.


As a matter of policy, major road improvements are provided based on a safety ranking system. At RCOC, "Safety First" is more than just a motto.


For more information, view our Your RCOC brochure.